I'm back! First off, a thousand apologies for the deafening silence. My humblest thanks to those who have taken the time and left their comments on the blog and also to those who have written me e-mails asking if I had succumbed to cholesterol and died. As you can tell, I'm well and alive, fatter than ever but finally back in Korea. Thanks to all ye’ ole faithfuls for your kind words and support.

I've been on the road, making it difficult to blog. But rest assured, I've not abandoned this blog (yet) and you'll get to see what I've been chomping down while outside Kimchi-land. I'll intersperse this into my regular Korean coverage, if that's OK with you guys. If not, let me know and I'll remove it completely from the blog.

Well I return to Seoul only to be greeted by a typhoon, well somewhat. Seoul's been hit by heavy thunderstorm since Friday. It's been gloomy all weekend. But thankfully I'm not in the southern regions, which are having it worse. Rain or no rain, I'm back. So let's get on with business.

Arrived in the Land of Smiles (occasionally referred to as Thailand by some) on May 24. Hence my blog will take in some Thai flavours in the forthcoming days. If I do get anything wrong in my posts, I would hope that and appreciate if my small following of Thai readers, namely Lynn and chez pim would correct me should I err. Khob khun maak khrab in advance.

Upon setting foot on Thai soil, I needed a quick fix for some of my Thai favourites and ended up here.

The place is sparse and basic, but the food is awesome. Oops I've concluded prematurely.

For starters, we have the perennial favourite, “nam prik kapi”. Nam prik kapi is a chili sauce heavily flavoured with dried (fermented) shrimp paste and finished with a squish of lime juice and a dash of “nam pla”(fish sauce). This is also known as “sambal belacan” in neighbouring Malaysia.

It is usually accompanied by raw vegetables. Here, we have “taeng kwa” (cucumber), "thua fug yaew” (long beans) and “thua phu” (winged beans or four-angled beans) on the left.

I also ordered my favourite, “setor” (in Thai, “petai” in Malay) which can be eaten raw or lightly grilled. That's it on the right. 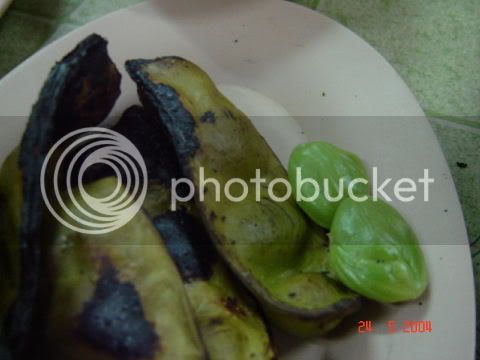 This is how the setor looks like peeled. In English, it's popularly referred to as “smelly beans”, which if you’ve ever tried it will probably attest to. If you’re going to have setor, plan to walk around with bad breath for the next couple of hours. Hmmm ...... I’m missing it already.

The nam prik kapi acts as a dipping sauce for the vege accompaniment. It also goes well with plain rice or just about anything. It notches everything up a step. The nam prik kapi is extremely spicy and will blow the roof off any house. The chilis used to make this is typically “prik kheenu” (sometimes referred to in English literature as “bird’s eye chili”), a small tiny variety of chili which despite its size is extremely potent. It’s even smaller and spicier than the “cili padi” found in Malaysia. The essence of a good nam prik kapi is the use of a pestle and mortar to blend it all in, and never with any device that requires an electrical socket. The nam prik kapi here is as authentic as it gets. Burn lips buuuuuuuuurrrrrrnnnnnnn!

To balance things off, this is “kaeng ched” which is clear soup of minced pork, cabbage, tube tofu and garnished with cilantro. Kid’s stuff.

This is another of my all-time Thai favourite, “kaeng som pla”. Kaeng actually refers to soup or curry, som is orange (but in this context is closer to lime/sour), and pla is fish. So kaeng som pla translate literally to sour fish soup.

Double thumbs up for these glorious Thai food. All for approximately 500 Baht (~US$14). Stay tuned for more.

And Happy Father’s Day to all the fathers out there.

Some people eat to live. Some live to eat. I belong to the latter, and it shows ..... at all the anatomically wrong places!

I'm no expert on Korean food, having just moved here recently, and I'll be the first to admit that I have a lot to learn. But I hope I won't have to make this journey alone, and with your help, learn more about Korean food.

I welcome any comments, recommendations, corrections and constructive criticism. With that said, what's for lunch?

KRW is the abbreviation for Korean Won, the currency of South Korea.